A biologic is an active pharmaceutical ingredient (API) produced by, derived from, or based on chemical components from biological systems.  Many biologics are polymers of fundamental building blocks such as sugars (e.g., polysaccharides such as LMWH or antigenic components of Pneumococcal polysaccharide vaccines), amino acids (e.g., monoclonal antibodies such as Humira and Rituxan), and nucleic acids. Over the last 25 years, biologics have become increasingly dominant in the pharmaceutical landscape to where they now comprise a majority of top-selling drugs worldwide.

However from a drug development perspective, the approval of a biologic is often more challenging, expensive, and time-consuming than a traditional small molecule drug owing to the complexity in preparation and characterization of the API.  This complexity in biologics development constitutes a barrier to bringing versions with high similarity (biosimilars) to market which is further complicated by a lack of scientific consensus on the best ways to characterize biologics and biosimliars.  This barrier can delay the introduction of new and innovative biologics and their generic biosimilar versions.

Regulatory agencies such as the Food and Drug Administration (FDA) have recognized this development challenge and have introduced guidelines to bring generic versions (know as biosimilars) to market quickly, safely, and cost-effectively.  Furthermore, the National Institute of Standards and Technology (NIST) has completed an initiative to illustrate how biologics & biosmilars could be characterized using a monoclonal antibody as a model system.  Key methodologies used in the NIST study include mass spectrometry to characterize primary sequence, disulfide bridge linkages, and post-translational modifications, and NMR to study higher order structure (HOS).  Although the subject of the NIST study was a monoclonal antibody, the principals and methodology used could logically be extended to other biologics and biosimilars.

Novatia has experience in characterizing the fundamental structural components of biologics by Mass Spectrometry (MS) and Nuclear Magnetic Resonance (NMR) Spectroscopy.  While examples of our capabilities for biomolecule characterization can be found throughout our website, we’ve recently completed a research project directed at developing MS and NMR methods for biosimilar profiling.  A few of the results of that study are shown below in an example of using NMR and MS to characterize disulfide bonds and three-dimensional solution structure of folded and mis-folded proteins using Bovine Pancreatic Ribonuclease A  as a model system.

Peptide and disulfide mapping analysis was completed using ThermoFisher’s Pepfinder software and further evaluated in Microsoft Excel.   The figure above shows the LC/UV trace of trypsin digested native (red) and SS scrambled (green) Ribonuclease A.  A visual comparison of the two LC chromatograms shows that there are clearly identifiable qualitative differences between the two samples.  While there are a variety of ways to compare the LC/MS/MS data of these two samples, one simple and informative way to view these data is reporting a percentage of detected SS linked peptides that exist in native form:  for this study we found that 96% of disulfide linked peptides from native ribonuclease A were native while 0% of the disulfide linkages of SS scrambled ribonuclease A were native.  These data show quickly and clearly the structural differences between the two forms of Ribonuclease A. 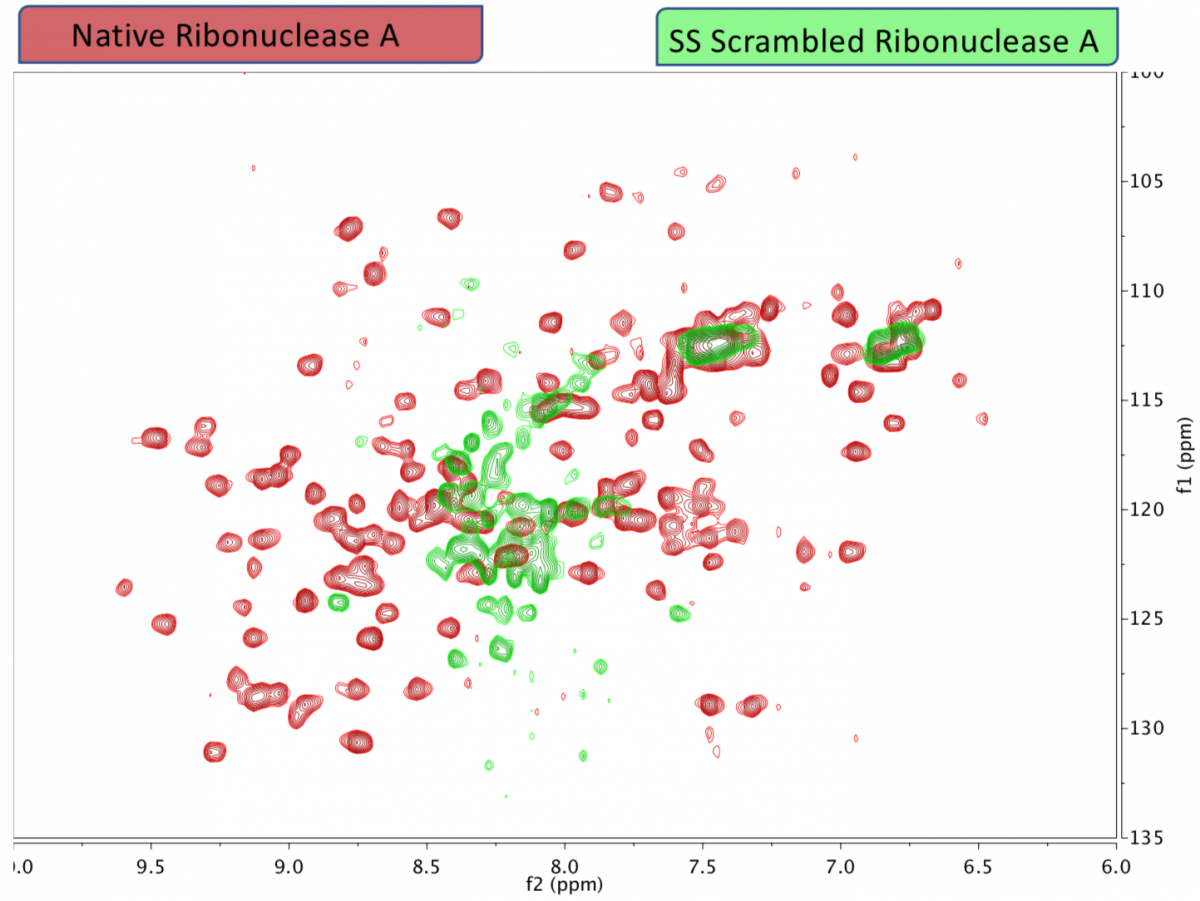 The figure above shows a overlay of the 2D 1H –15N HMQC NMR spectra of Native (red contours) and SS scrambled (green contours) Bovine Pancreatic Ribonuclease A where cross peaks between directly bonded nitrogens and hydrogens (protons) can be observed.  NMR chemical shifts are highly dependent and characteristic of structural environment.  For proteins, the chemical shifts of nitrogens and protons are very sensitive to secondary and tertiary structure such that small changes in the local environment can affect the position of cross peaks in the spectrum.    NMR spectra like these are useful for comparing HOS of biologics and biosimilars as the pattern of cross peaks can be considered as fingerprint allowing for rapid qualitative comparison of samples for three dimensional solution structure similarity.