Skip to main content
ProMass Knowledge Base
< All Topics
Print

Nearly all elements have more than one naturally occurring isotope. Since each isotope has a unique mass, the mass spectrum of even a single element will often be comprised of a mixture reflecting the relative abundance of each isotope. When elements are combined to form a molecule, the mass spectrometer “sees” the entire distribution of masses from the combination of elements and their isotopes. How well we “see” this distribution and how accurate the masses are is dependent on the available resolving power (resolution) of the mass spectrometer.

With normal resolution mass spectrometers (e.g., ion traps and quadrupoles) our ability to resolve the isotopic pattern ends at approximately 2000-3000 Da. As a result, we may only see a single unresolved m/z peak for a given isotopic distribution for higher mass species on these instruments. However, with the power of high resolution mass spectrometers, we are able to clearly separate isotopic peaks and delve deeper into the data. 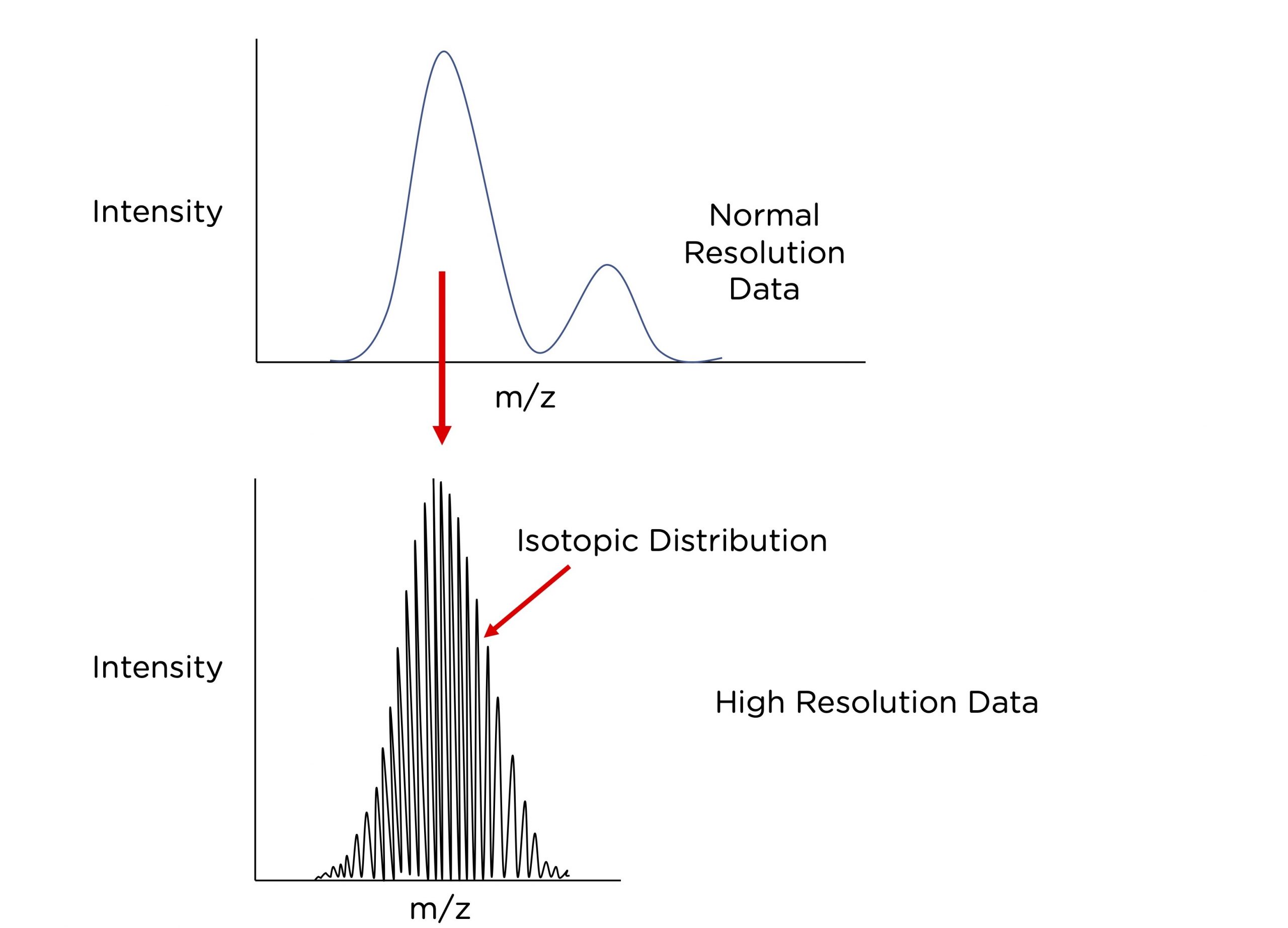 Novatia uses the term “nominal mass” a bit freely. If we report normal resolution data for a small molecule sample (<1000 Da) on one of our ion trap instruments, for example, we usually refer to this as nominal mass data. Although the accuracy of our ion trap mass spectrometers for small molecule samples is typically within 0.1 – 0.2 m/z units of the expected monoisotopic mass value (see below) for the ionic species. The ionic species reported are typically protonated [M+H]+ for positive ions or deprotonated [M-H]- for negative ions, where M represents the monoisotopic mass.

Average mass is calculated by taking the weighted average of all isotopes in a given molecule and adding them together. The average mass of water would be (1.0079 + 1.0079 + 15.9994 =) 18.0152 Da. The molecular weight of a compound is its isotopic average mass. This differs significantly from the monoisotopic mass. 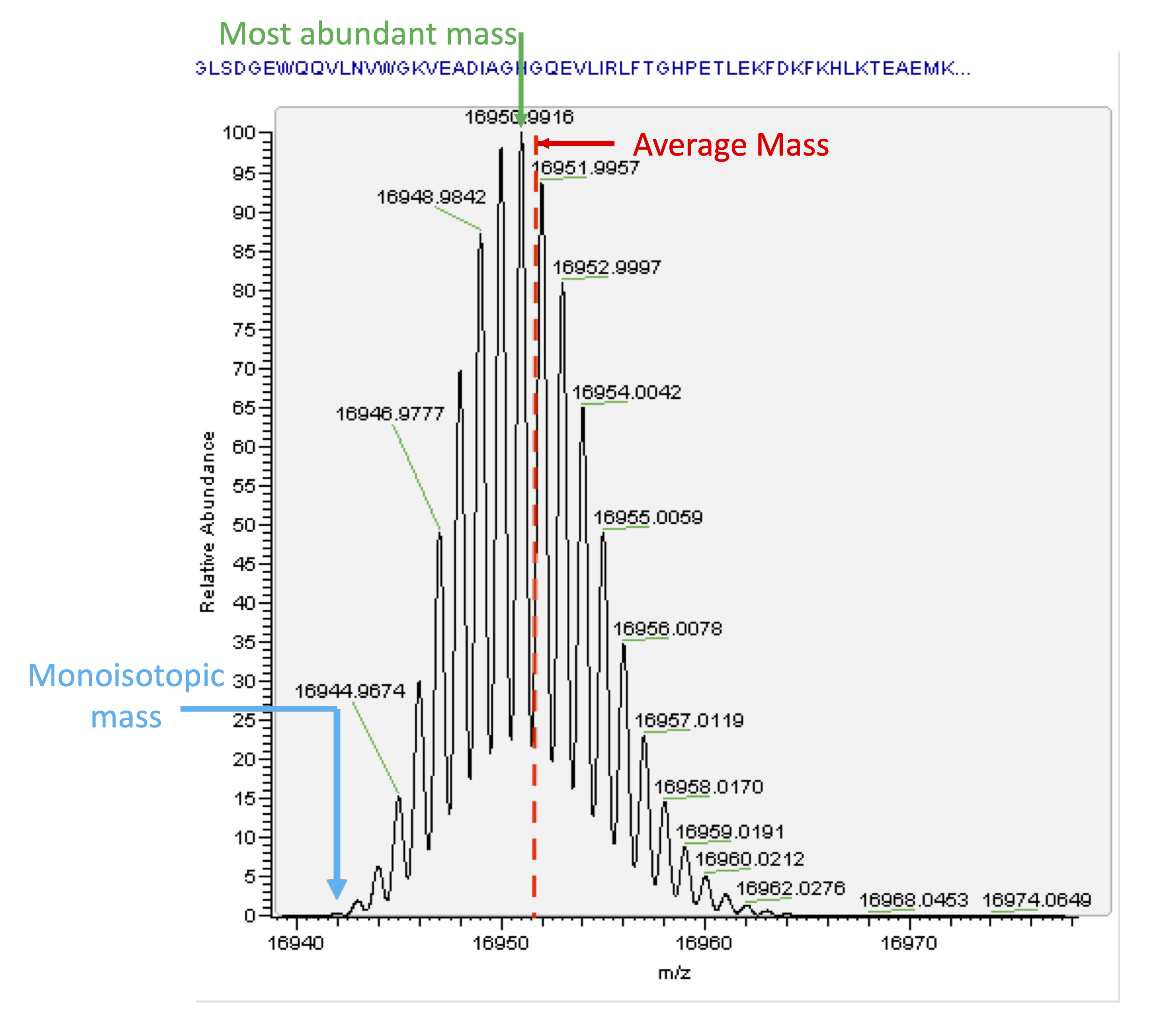 As stated above, the situation gets more complex for large molecules such as proteins and oligonucleotides. The image shown above is the calculated isotopic distribution of myoglobin, a ~17 kD protein with the molecular formula: C(769) H(1212) N(210) O(218) S(2). The monoisotopic mass is indicated by the light blue arrow at 16940.965. The isotopic average mass is denoted by the red dashed line at 16951.5 Da. At Novatia, high resolution mass data allows us to perform “deisotoping” on the mass spectral data and allows us to determine the monoisotopic masses of large molecules with very high accuracy (typically less than 5 ppm or 0.0005%). Deisotoping essentially collapses all of the intensities of an isotopic distribution into a single monoisotopic peak. This is especially important for larger molecules like complex proteins and oligonucleotides, as the monoisotopic peak alone can have quite a low intensity, as shown above. This can be addressed with HRMS analysis and a deisotoping processing method. 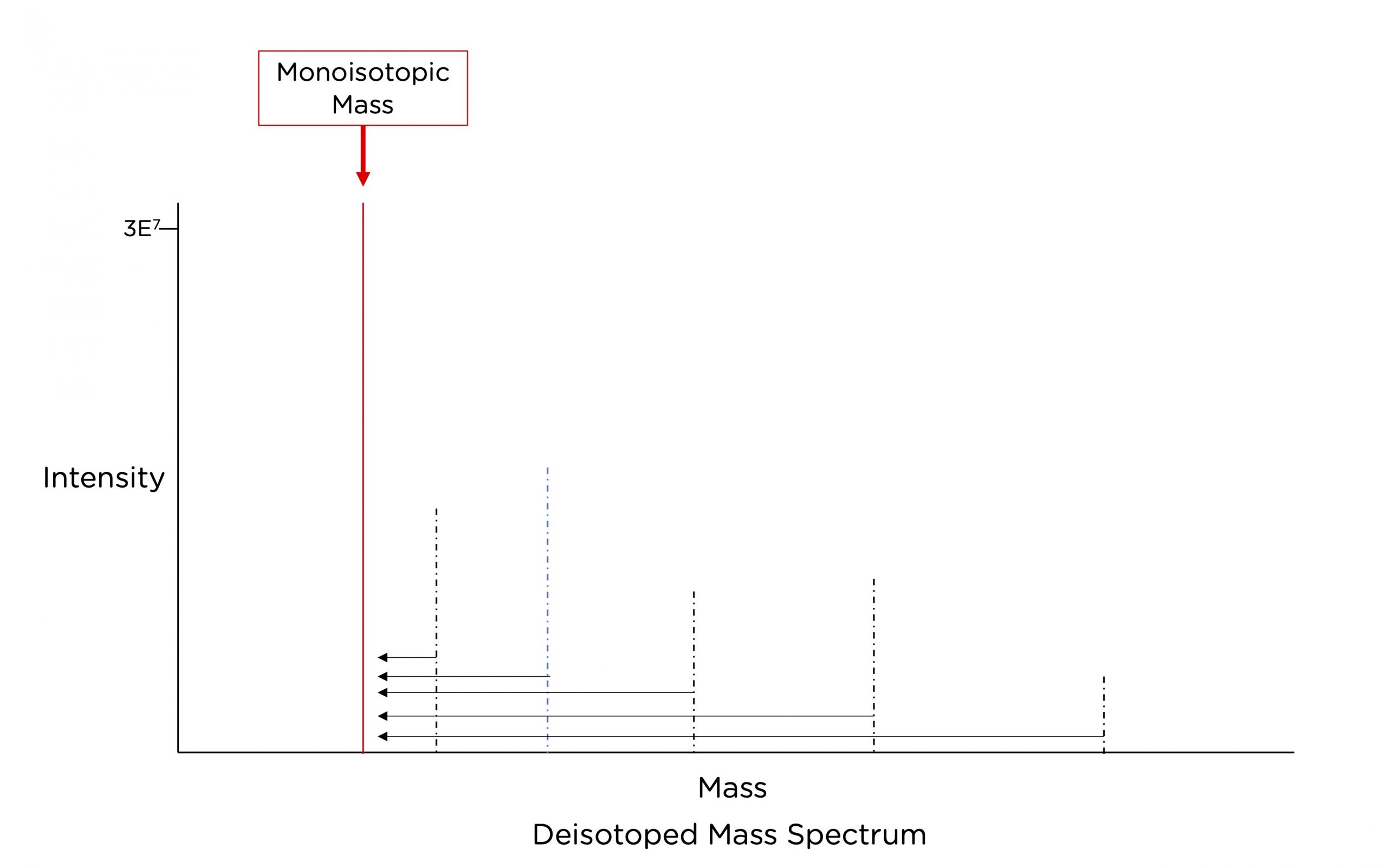 So what does this mean when I receive my mass spec result from Novatia? Will I get the nominal mass, average mass, or monoisotopic mass and which is more accurate? The answer depends on your sample analysis request. If you request one of our “nominal mass” small molecule services, your samples will be analyzed on one of our ion trap systems. If you already know the identity of the molecule that you are working with and just want to confirm that it is present, then it is possible that nominal mass determination using a standard resolution instrument is sufficient for your application. The masses determined using our normal resolution instruments will generally be determined with an accuracy of +/- 0.2 mass units from the expected monoisotopic mass. If a high resolution measurement is requested, the accuracy is typically within +/- 3 ppm (e.g., +/- 0.0012 mass units at m/z 400). For small molecules, this very high accuracy is absolutely essential in determining the chemical formula and ultimately the structures of impurities, degradants, metabolites, or general unknowns.

Isotopic average mass is reported for all biomolecule sample analysis requests above 25 kDa, and all other standard (non-high resolution) biomolecule MS analysis requests. This includes proteins and oligonucleotides. The mass accuracy for large biomolecule MS analysis for determination of average mass is typically +/- 0.01 % or 100 ppm. For high resolution sample analysis requests, we can determine the monoisotopic mass up to ~20-25 kD with +/- 5 ppm mass accuracy. Above ~20-25 kD, monoisotopic mass cannot be determined with our available instrumentation and average mass determination must be performed. High resolution/accurate mass for biomolecules is particularly useful in the following application examples: identifying unknown impurities for biomolecules, peptide mapping and the determination of modified residues or covalent modifications of proteins, metabolite id of oligonucleotide therapeutics, and sequencing of oligonucleotides.

Next What is the purpose of deconvolution?
Table of Contents